You are here: Home / Career Blog / Career choice & development / Kill your darlings… or do you need to let go? 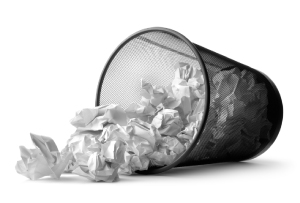 Before I start, let’s be clear: I’m talking metaphorically about careers here…

‘Kill your darlings‘ is a quote from the writer William Faulkner, and I first came across it studying graphic design. Fledgling designers have a tendency to create something, with their shiny new Adobe skills, and then promptly fall in love with it. From there, they resist all attempts to change it, better it or push their own abilities, even when it clearly isn’t working. Ironically, in creating, they lose their creativity.

The quote’s a warning: Be willing to re-create – don’t get so invested, you get stuck. This applies to any creative pursuit; from writing a novel to designing a logo…

It’s just as relevant to choosing, changing or developing a career.

Whenever we create, we make an investment… and once we invest ourselves, it’s hard to change. All that work. All that time. Maybe all that money.

When it comes to careers, all that emotion too. Jobs aren’t just clusters of skills and tasks, they’re identities – ways we define ourselves, project ourselves, announce our standing, and sometimes meet others’ expectations. And we can get so invested in all of this that we become truly stuck.

We can become stuck because we don’t know what’s wrong, so we don’t know how to fix it… or stuck because we know what needs to change, but just can’t see a way out; there are bills to pay, practicalities to consider. Alternatively, we can get stuck, like our designers, because we’ve fallen in love with the idea – with how the thing looks – even when the reality is making us miserable.

You can always get unstuck, if you’re willing to step back and change your creation.

If you’ve invested in a career that isn’t working for you, know you’re not alone. By the time I see someone, typically the quiet whisper that something’s wrong has slowly become an insistent roar… and something has to give. It takes courage to seek help, and courage to change, even when the status quo clearly isn’t right. Letting go inevitably involves loss… but it creates room for something new and better too.

When I was designing, it pained me to cut my losses – to take that creation I’d spent so long planning and crafting, and give it away. Often, I’d resist far longer than made sense, hitting my head against the proverbial. And yet so many times, it was letting go that led to breakthrough. Stepping back, I found I could see and save all the bits of work that worked, and then blend them together into something new and unexpected – something so much better than the original.

As with design, so it is with careers – you have to be willing to let go, to move forwards.

Killing your darlings is hard, but to do your best work – to reach your potential – you have to have the courage to re-assess, tweak, change, combine… and every now and again, to give it away and start over.

Need help with moving on in your career?