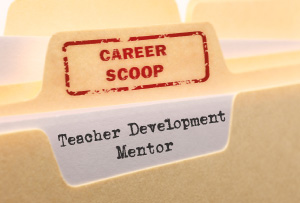 First off, why did you decide to become a Teacher Development Mentor?

I love teaching, I think it’s something I’m very good at, and I felt education was something I felt passionate enough about to want to dedicate myself too.

From the international development perspective, working in many countries around the world made me very aware of the many disparities in different countries, socially, economically etc. One major factor that can help level those disparities a bit is improving access to, and quality of, education available in a country, and it was here that I felt I could best use my skills. In short, a pursuit of social justice, combined with a personal love of sharing knowledge made me do it!

I don’t really think I had a path, not in the traditional sense. I have worked in about 15 different countries, doing various different jobs, but I always kept coming back to teaching when I grew frustrated with the other job (I have been a tour leader, ski chalet maid, camp counselor, office worker, television researcher and bookseller!).

Finally, I decided to stick with teaching, and then grew more interested in the international development aspect side, so I went and studied a Masters degree in Education and International Development. From there I started looking at opportunities, which led me to this role.

What, in your opinion, is the best bit of being a Teacher Development Mentor?

Seeing the teachers develop day to day; inspiring them to try harder, try new ideas, love their job more and think about what they do. One of the most common things my teachers tell me is how they have grown in their own self-confidence, which just makes me burst with pride for them – really I’m just the catalyst for that, and it’s fantastic to see. With that also goes watching the children change from hating their lessons, to being so enthusiastic they don’t want to go out for recess!

Like most jobs I’m sure, dealing with management and bureaucracy – which only increases when you are dealing with large institutions like national education systems and government ministries.  Also, if you are passionate, dealing with some pretty apathetic shareholders can be frustrating, if not downright disheartening.

On a personal level, loneliness and isolation can be a strong downside when you are working largely by yourself in isolated circumstances. In small rural communities you can find yourself welcomed, but you can also find yourself standing outside of the community as well. Lack of access to contact with others cannot be under-estimated when you are having to constantly motivate yourself and those around you, which can be exhausting at times.

More or less it’s what I expected. Projects vary, and some are more flawed than others, and that can be tricky. I suppose I was rather idealistic when I started, believing that people, when presented with an opportunity to develop and change, would, if not jump at the chance, at least be interested, which has not always been the case. I also didn’t account for how little the stakeholders who initiated the current project I’m on, would support their own attempts at change, which has been frustrating but, I suspect, not unusual.

Being a mentor is very different from being a trainer or a coach. In a mentoring role, you are there to support the personal development of teachers, by encouraging them to reflect on their practice, help them think critically and imaginatively about what they do, rather than a trainer role, where you would be much more likely to be giving more explicit input. Teachers, headmasters and the public often think I’m there to teach the teachers, or even to teach the pupils, and that can be hard to negotiate. Because this kind of development is incremental and takes time, often the perception is that we are not doing anything, which can lead to frustration all round.

There is also a general perception that development can happen rapidly, which is completely not the case when you are dealing with establishment ideals, systemic issues and problems, and the cultural expectations and perception of what education is and what it’s for. An example would be the teacher who says “games in the classroom is all very well, but it’s not learning, is it?” since the perception of learning is pupils sitting, listening to the teacher talking, then writing in their book.

What kind of people tend to do well?

You have to be strong mentally and emotionally (and sometimes physically). You are often working alone, or with a small group of people, so you have to be ready to be self-motivating and challenging, whilst also not being too hard on yourself.

I do this work because I genuinely care about people and about making a difference in the world, that’s what motivates me. I suppose you could do this job if you had other reasons, but I doubt it’s the job for you if you’re only interested in making money, or personal glory or gain.

Other strengths needed are an ability to empathise with others, to understand their perspective- especially important when you’re working at multiple levels- the concerns and motivations are very different for a teacher, a headmaster, a Ministry Official, a parent and, of course, a child. Being able to understand those views enables you to try and work out a pathway through which everyone can be involved in, and is the best for all concerned.

At the same time you have to be able to think of the “bigger picture” which sometimes means making hard decisions in the interests of sustainable development (yes, you could buy the pupils presents, or give books to the teachers, but what happens when you leave? Yes, you could give lessons for free to parents, but does that put extra pressure on teachers to carry on when you leave?).

This kind of work requires people who are able to think creatively, compassionately, laterally and long-term.

Think long and hard about the reality of it – yes, working in foreign countries “doing good” might sound appealing, but do you really want to live a semi-nomadic lifestyle, often isolated from friends and family? Are you able to cope with no internet, no phone, sketchy transport, no roads, limited variety of food and poor medical facilities? Are you able to observe and not judge, often in situations that you would be horrified by in your own country? Can you keep yourself motivated and positive under such circumstances?

If this still appeals, then I suggest getting informed. There are lots of different paths of career in international development, perhaps start with an area that interests you. Look around at what charities/ NGOs/ bilateral agencies work in that area. Read up; get knowledgeable about the world out there. Think about your own skills and how they can be used.

A good foot in the door (although sadly it is costly to begin with) is to volunteer with an NGO that interests you. Get some experience that way, to test it out. Often charity and development jobs evolve from internships and volunteer work, and even if you decide ultimately it’s not for you, it’s still an experience to put on your CV.