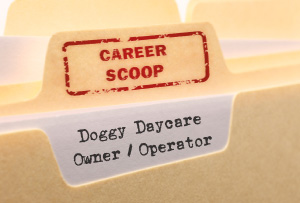 First off, why did you choose this career?

I’ve always had an enormous amount of affection for and fascination with the animal kingdom. From primary school age I knew I wanted to work with animals, although I was misdirected by a school career counsellor into pursuing a more academic path for many years. When I reached 30, I had a major reassessment of my direction and knew I had to give working with animals a try. I never looked back!

I needed intially to increase my experience and knowledge of dogs, as I had never worked with them before and had only been a pet owner. This meant accepting low-paid, unpaid and volunteer work while I learnt about dog behaviour, socialisation and health. It also meant simultaniously juggling part-time and casual roles with volunteer and unpaid roles, and further study.

Initially I started working casually for a pet sitting company, and then took a job as a kennel attendant with Guide Dogs for the Blind in the UK. Upon returning to Australia I joined a positive training obedience business as an unpaid cadet and volunteered at the RSPCA to build my experience. I then worked for Guide Dogs Queensland – initially in fundraising (using the ‘foot in the door’ approach, I took a role in Puppy Sponsorship) – while volunteering in kennels. After a year I was employed in GDQ kennels for three years, and then in Puppy Development for a further year.

Concurrently I remained working as a dog obedience instructor, studied my Certificate III in Companion Animal Services, and worked casually for a doggy daycare facility. Except for the Puppy Development role – which was full-time – all my other roles were part-time or casual and involved shift work, weekends and evenings.

Eventually I left GDQ to take on a full-time role as a supervisor at another dog daycare facility, while working part-time as a dog obedience trainer at the RSPCA. When the daycare facility I was working at closed down due to the demise of it’s parent company, I saw the opportunity to create my own business offering active daycare services (based in parks and beaches rather than in a facility). Opportunity met with preparation and I knew I was ready to run my own business. I discussed the idea with the current business owners, and with their clients, and my business was born.  I have been operating for almost four years.

What, in your opinion, is the best bit of being a Doggy Daycare Owner / operator?

Building relationships with the dogs and then getting to see the joy on their faces as they run free with their friends in the sunshine (and sometimes the rain). It’s divine! I also love being able to operate during usual business hours so that I have time to spend with my family. And it’s wonderful to be finally earning a decent living, as jobs with dogs are generally not well renumerated!

By far the worst part is when one of the dogs dies. In a daycare setting you build strong and loving bonds with the dogs and see them regularly for years, so when a death occurs it feels like losing a member of your own family. Also in that time you have built relationships with the dog’s owners too, so while you are immersed in your own grief, you are also responding to the devastating loss that they are suffering. You notice the dogs who are missing their special friend, and the shift in your group dynamic that is caused by their absence. It breaks your heart on so many levels.

Is it what you expected when you first started out?

It’s even better. Every day I feel blessed to be able to earn a living in such a wonderful way.

The idea that this work is easy and you are free to chat while working. Actually, in order to ensure the safety and emotional comfort of the dogs in your care daycare workers need to be ultra-vigiliant, constantly reading each dog’s body language, managing the adrenaline levels, intervening when more persistent  (and generally younger) dogs don’t respond to the calming signals other playmates are sending, scouring the space for potential hazards and the behaviour of any incoming dogs, and generally maintaining an alert attitude that responds to the group dynamics of the dogs.

It requires a solid understanding of dog socialisation, behaviour, and body language, and the ablility to appropriately channel the group’s energies through the use of positive reinforcement and training.

What kind of people tend to do well in this kind of career?

People who have the ability to remain very calm and collected while processing multiple shifting stimuli and conditions. If you are overwhelmed easily, or fly off the handle, this job will exacerabate your unease (and the consequently the dog’s unease). Of course a love of dogs is a given, but a calm, even temperament, and a willingness to learn as much as possible about dogs, are highly advantageous to your professionalism in the role.

If you know in your heart it is the right job for you, don’t give be afraid to be persistent as you pursue your path. I gave my resume on spec to Guide Dogs UK, then kept dropping in to see them to enquire if any roles had opened up.

In Australia, I took a role that wasn’t in the department I wanted and kept presenting in kennels until they took me on as a volunteer (and gave me the opportunity to prove my worth). It wasn’t a short and easy route (I am not naturally assertive so it was difficult for me), but showing willingness and dedication did the trick.

Also kiss goodbye the notion of good money while you gain your experience. There are enormous amounts of people who love animals and want to work with them, so the labour supply is bountiful. Until you are in a position to own your own business you won’t be on a high wage.