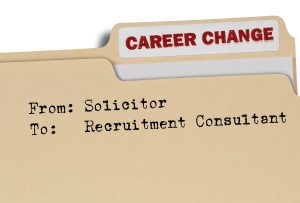 What took you into law in the first place?

I didn’t know what else to do. I was above average at school and both my parents and my Auntie were always saying I should be a lawyer. I studied law in my final year at school and when I got an A – as someone who solidly got B’s – I thought, this is a sign.

Were there any bits of it you did enjoy?

I liked feeling part of something big and professional… and I liked all the learning, looking at the details; being able to do something properly.

When I moved into property law, I also really liked helping people. They were genuinely on an exciting journey, and I enjoyed going on that journey with them.

When did you realize you needed to make a career change?

Within the first two years, when I was focussed on criminal law, which was a mistake. I would be sent across the city to meet with really dodgy people, often at night… and attending trials and hearings was really negative. I felt out of my depth.

I had a boss who wasn’t supportive – they often passed on the work they didn’t want to do to me – and it really put me off. I was anxious and afraid of doing something wrong. In the end, I decided it wasn’t what I wanted to do.

What steps did you take from there?

When I went to talk to my boss, I told them why I was looking to move on and they suggested I give it another go and try another area of law. There was a maternity cover role in conveyancing at the time, so I moved into that – and I ended up spending four and a half years there. I enjoyed it much more, but was still always scared of making a mistake and being sued.

When we moved to Australia, I was relieved to leave law in a way – I had a friend who kept trying to get me back, to work as a partner in their law firm, but I was off travelling with my partner. We settled for a bit in Cairns and I got a job for an employment services provider, placing people who’d never worked, into employment.

We found Cairns a bit too small after living in a big city, and moved to Brisbane, where I saw a job as a Recruitment Consultant and decided to try it as something different. I didn’t make a full commitment to start with, I just thought what’s the worst that can happen?

What things were most helpful in changing career?

Taking action and giving it a go – deciding to try something different. I actually found that I really enjoyed it, and compared to law, it didn’t feel like work at all. It was so much easier!

The other thing was understanding my values better. I realised that I was more of a helping person and not someone who liked conflict at all.

What kinds of things held you back?

Leaving law behind, I felt like I was going backwards when I’d come so far. And working in employment and recruitment didn’t feel as prestigious – it’s not as well regarded as a profession. I still look at what more I can do, and what I can learn.

Tell us a bit about what you’re doing now….

These days, I’m focussed on working with executives, in executive search. As an ex-lawyer, I definitely get to bring my professionalism to my work and I’m learning a lot about business, talking about operations and strategy with clients.

I’m much more commercially minded now than I was when I was working in law, getting to better understand the business side of things, and I really enjoy that I’m still learning.

What advice would you give people thinking of making their own career change?

Try something, dip your toes – even with a short-term contract, part-time work or volunteering. It’s the only way to see what something’s really like.

Also think about your values and what you’re good at, as well as the skills you’ve got – that’s really important. Skills are often transferable and can take you into other areas. And take a global perspective when you’re looking at your options, because things can really change.